(I want to open my mind)

The following EZ steps are pulled from Secret #10 of “Is America Broken?”  There are EZ Ways to Get Started. Pick one or more from the list and see how it might change your view or help to bring you hope.

EZ 1:  Good vibrations!  Without positive emotional reinforcement, brain-dead Civics 1.0 and Media 1.0 can just suck-the-life right out of anyone.  We suggest:

The journey of 1,000 miles begins with a single step.

EZ 2: Icebreaking, fun, inspiring videos.  Most are under 10 minutes long.  Organizations around the world are working on improvements for civil discourse, conflict transformation, and freedom for all.  Check these out.

Start by recognizing that much of the media is preaching to a tribe.  The tribe is a “niche” and the niche is easier to advertise to. By giving them your attention, you are probably re-enforcing the niche and thus the  tribalism.

Balanced news is very hard to find.  If nothing else, be aware of which direction your news source is slanted, then start “taking it with a grain of salt.”  Three sources we find helpful include:

A real hope is that the news media will see, report and encourage harmony, relationships, Confident Conflict Transformation (CCT) and more.

EZ 6:  When reaching for the TV remote, choose to watch a movie that promotes understanding, rather than movies that promote us-versus-them or winning-and-losing.

EZ 7:  A whole world, right in your own neighborhood 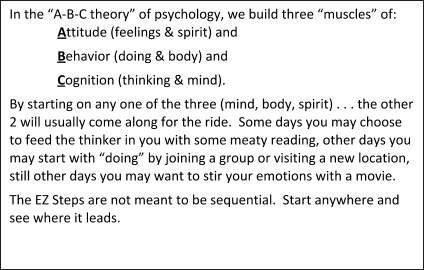 EZ 11: Attend a governing body meeting such as a school board meeting, or city counsel, or local court of common pleas.

EZ 12: Attend a multicultural event such as a Jazz Festival or an Inter-Faith group.

We need each of you regardless of how you engage! Contact us today to make a difference!

Fighting To Understand is a 501(c)(3) Corporation on a mission to make seemingly complicated topics into “simply complicated.” We do this by forming a collaborative cross-section of “regular” people to fight to understand a topic, in as much complexity as we can muster.  We then present the findings to other regular people.  Our maiden voyage: Is America Broken?